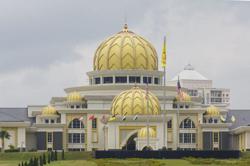 KUALA LUMPUR: All events in conjunction with the official birthday of the Yang di-Pertuan Agong scheduled to take place in June will be postponed, says Istana Negara.

However, the Palace said that June 7 would still be a public holiday.

Istana Negara Comptroller of the Royal Household Datuk Ahmad Fadil Shamsuddin said this was due to the increase in daily infections and new fatalities due to Covid-19 as well as the implementation of the movement control order nationwide from May 12 to June 7.

"The postponement was based on the royal consent of His Majesty after taking into consideration public safety and health as well as to protect the lives of the rakyat in order to stop the health crisis from further worsening," he said in a statement on Friday (May 28).

Ahmad Fadil said the royal consent was also taken as part of a protective measure.

"All the events have been postponed to dates to be announced later," he added.

This will be the second time that all events held in conjunction with the official birthday of the King had been postponed, he said.

"However, it has been decided that June 7 will still be declared as a public holiday in conjunction with the Yang di-Pertuan Agong's birthday," he said.