PETALING JAYA: Three men have been arrested in connection with the assault and robbery of a foreign man, say Petaling Jaya police.

OCPD Asst Comm Mohamad Fakhrudin Abdul Hamid said the incident occurred at around 10.30am on Saturday (May 22).

"We received a report from a 27-year-old foreign worker who claimed he was cycling back from work near Bandar Utama when he was ambushed by three men armed with knives.

"They beat the victim and demanded his cash and mobile phone at knifepoint," he said in a statement on Thursday (May 27).

He said the victim suffered injuries from the beating and claimed he suffered losses of at least RM500 from the robbery.

"Based on a tipoff, a police team from the Damansara police station arrested three men aged between 18 and 22 near the Damansara Utama area.

"We checked the three suspects and found a number of items believed to be stolen including four mobile phones, a wallet and sling bag, RM134 cash and an umbrella," he said, adding that two of the suspects had records for theft and rioting.

He said during investigations, the suspects revealed that they have been involved in at least five similar cases in the same area.

"We have remanded the three for seven days to help with further investigations," he said. 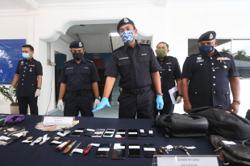