They want the government to take the matter seriously, saying that neighbouring countries such as Singapore, Brunei and Thailand have already banned the devices.

“As a government that is responsible for protecting the health of its citizens, why can’t it copy the good example of its neighbours, ” they said in a joint statement during a press conference streamed on Zoom on Wednesday (May 26).

The statement, read out by National Cancer Society of Malaysia managing director Dr M. Murallitharan, was endorsed by more than 50 other bodies and NGOs.

Dr Murallitharan said that while the devices have gained popularity in Malaysia since 2016, the problem worsened in 2018 with the introduction of pod mods, which are smaller, easier to use and offered a wide variety of flavours.

He pointed out that the World Health Organisation (WHO) had come up with several statements warning of the dangers of e-cigarettes.

“These devices are said to provide an alternative but it has proven to be harmful to health.

‘The use of e-cigarettes with or without nicotine has health implications. Nicotine causes addiction and the use of nicotine among children can have an impact on brain development as well as increase the risk of (using) other banned substances, ” he said. 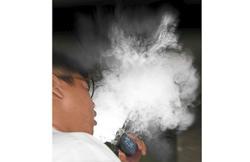