IPOH: While the parents of K. Nagantheran have accepted his passing early this month, they are still mourning the loss of their only child.

His mother, M. Kalpana, 46, said Nagantheran, 22, was a filial son who was also known for always helping others in need.

“He was a great son who was always there for us.

“After he finished schooling, he started looking for jobs because he did not want to burden us, ” she said when met after receiving aid from the Social Security Organisation (Socso) for his late son at the Perak police contingent headquarters here on Tuesday (May 11).

Kalpana said that after Nagantheran started working as a medical dispatcher in Klang, he still called his parents daily.

"He'd ask if I had taken my medicines.

“His daily text messages and calls were what I look forward to every day but now, I feel empty. No more calls from him checking if his father and I have eaten or not, ” a tearful Kalpana added.

Nagantheran was killed when he helped an accident victim at KM263 of the North-South Expressway, near the Menora Tunnel, on May 2.

He was heading to Kuala Lumpur from Taiping when he stopped his car to help 52-year-old Maryamah Talib, whose car had landed in a ditch.

Nagantheran died on the spot after an oncoming car slammed into them. Maryamah died at Raja Permaisuri Bainun Hospital.

Kalpana said she and her husband had met their son on the day of the accident.

“We were at a family event when he showed up as a surprise.

“We knew he was working that day but were unaware that he would come, ” she said.

After the event, Nagantheran's father asked him to follow their car in his, she said.

"But after passing the Menora Tunnel, we did not see his car. His father kept calling him but he did not pick up. We thought maybe he did not hear the phone ringing.

“It was until we reached Silibin that someone called my husband to tell him what had happened to our son, ” Kalpana said.

Perak Socso director Anthony Arul Dass said Nagantheran’s family will receive about RM220 every month while the family of Maryamah, who taught at a private hospital here, will get about RM1,000.

“Maryamah’s family got more because she had been contributing since 1987 while Nagantheran only started in 2016.

“We also presented RM2,000 each to both families to help with their funeral expenses, ” he said. 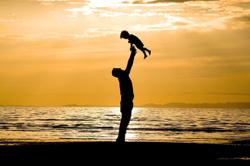