JOHOR BARU: The Customs Dept has seized contraband liquor worth over RM1.39mil in a series of raids here.

State Customs director Sazali Mohamad said 59,924 bottles and cans of liquor with unpaid taxes were found in three separate locations between April 26 and 30.

He said the first seizure of 24,200 bottles was made at the Johor Port’s container inspection bay at 12.30pm on April 26.

“The shipping company failed to produce any valid documents for the drinks, which were kept in a storage container, ” he said.

In a separate case, the department raided a terrace house in Taman Bukit Indah here at around 1pm on April 30 and found 7,404 bottles of liquor, estimated to be worth RM815,841.

“We believe that the house, made to look like it was vacant, was used as a store for the contraband items as a way of evading the authorities.

“About an hour after the raid, with the assistance of our Sungai Pulai enforcement unit, the department raided a food supplier’s warehouse in Seksyen U5, Shah Alam, Selangor on the same day.

“We are in the process of identifying the owner of the vehicle and investigations are underway to find out whether the three cases are linked, ” he said.

He urged the public to continue channelling information about illegal activities to the authorities to combat the smuggling of goods such as cigarettes, alcohol, fireworks, drugs and vehicles.

Those with information can get in touch with the department via the Customs hotline at 1-800-88-8855 and the caller’s identity would be concealed, he added. 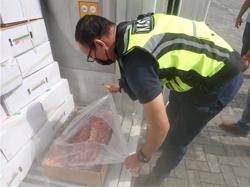