JOHOR BARU: More than RM1mil worth of fireworks and contraband cigarettes have been confiscated by the General Operations Force (GOF) in just one day at three districts in Johor.

GOF Battalion 5 commanding officer Supt Dimin Awang said the items were seized between 10am and 12.30pm on Friday (May 7) in Pasir Gudang, Muar and Iskandar Puteri.

“In the first incident, we were able to seize some 157 boxes of various fireworks worth about RM115,318 in a house at Taman Air Biru, Pasir Gudang. Also seized was a vehicle, which was believed to have been used by the syndicate to distribute the goods.

“Two local men, aged between 39 and 42 years old, were also arrested and have been brought to the Seri Alam police headquarters, along with the items confiscated for further investigation under Section 8 of the Explosives Act 1957 (Act 207), ” he said in a statement here on Saturday (May 8).

Supt Dimin said the second incident took place at about 11am at Taman Putera Indah in Muar where a total of 362 boxes and sacks of fireworks worth about RM362,350 were seized.

“Two local men, aged between 33 and 37 years old, were also arrested along with a lorry and brought to the Muar police headquarters, ” he said, adding that the case would also be investigated under the same Section 8 of the same Act.

The GOP Battalion 5 scored their largest seizure of the day during the third arrest where some 5,000 boxes of contraband cigarettes worth about RM913,000 were seized at Taman Selasa Jaya, Skudai in Iskandar Puteri.

“A 64-year-old local man was also arrested and brought to the Iskandar Puteri police headquarters.

"A vehicle believed to have been used to distribute cigarettes around the Johor Baru area was also seized," he said, adding that the case is being investigated under Section 135 (1) of the Customs Act 1967.

He noted that the total value of items seized were estimated to be about RM1.38mil.

"We believe that the arrests and seizure have broken the chain of illegal cigarette and fireworks distribution in the area," he said, adding that he hopes the public would continue providing information to the authorities of such activities. 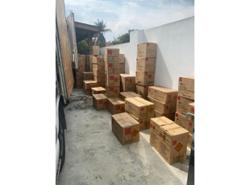