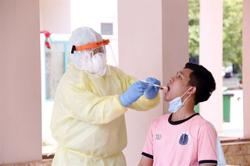 JOHOR BARU: Police here raided a Taman Sri Tebrau restaurant here and arrested 18 Vietnamese women for being in the state without valid documents

Johor Baru South OCPD Asst Comm Mohd Padzli Mohd Zain said that the suspects are aged between 23 to 51 and were arrested during the Ops Noda raid that was conducted at about 10.10pm on Tuesday (April 20).

“The women are believed to be working as guest relations officers (GROs). Some of them tried to flee upon seeing the police but were later caught," said ACP Mohd Padzli.

“All of the suspects were arrested to check their travel records with the Immigration Department, ” he added in a statement here on Wednesday (April 21).

All of the suspects are currently under remand for 14 days starting Thursday (April 21).

Call and wish your loved ones 'Selamat Hari Raya' for free from 10pm Wednesday (May 12)
US DOJ remits RM1.9bil in seized monies to Malaysia
Melaka cops tracking down culprits behind graffiti
Dr Wee commends CAAM for 'Most Perfect Raya' video during adverse times for aviation industry
100,000 compounds issued over SOP violations since MCO 1.0, says Bukit Aman
PLUS: All R&R facilities on highways open during festive period
MCO: Filming activities in studio allowed, cinemas not allowed, says Finas
Dr M: I'm sorry for flouting SOPs and ready to face action
Miros releases graphic but meaningful video on use of 'dummy buckles' to avoid wearing seatbelts
Sports anglers cannot wet their lines during MCO 3.0, fishing only allowed as a livelihood