PUTRAJAYA: Covid-19 daily figures saw a slight decline with 1,317 new cases detected compared to the 1,739 infections recorded the day before.

However, new cases remained higher than recoveries for the fifth straight day – which means the number of active cases continued on an upward trend.

“Of the state’s total, 21 cases have been uncovered from existing clusters while another 235 are those detected from contact-tracing activities.

“Another 95 cases are sporadic ones detected from other Covid-19 screening activities, ” said Dr Noor Hisham in his daily update.

Cumulatively, the number of confirmed cases in the country is 362,173.

Four more people in Malaysia have succumbed to Covid-19, taking the country’s coronavirus death toll up to 1,333.

Dr Noor Hisham said all four were Malaysians aged between 45 and 74.

“Two of the deaths were in Kuala Lumpur while the other two were reported in Sabah and Selangor. The ministry extends its condolences to the family members, ” he added.

The fatality in Sabah has been classified as a “death on arrival” case at Tawau Hospital.

The deceased was a 58-year-old man who suffered from hypertension, heart disease and dyslipidemia.

At present, there are 188 patients battling the virus in intensive care units nationwide.

Of that total, 84 are put on ventilator support.

Meanwhile, a Covid-19 cluster originating from a social event in Taman Canning, Ipoh has resulted in the discovery of 39 confirmed infections.

Named the Jalan Canning Estate cluster, the outbreak started from a 34-year-old woman who is a China national.

The cluster is one of three community outbreaks detected by the ministry yesterday.

There are also seven new clusters detected from workplaces. 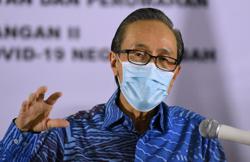