KOTA KINABALU: A 60-year-old woman endured a terrifying one-hour ride of about 32km with carjackers before she jumped out of the moving vehicle.

She was shopping for groceries on Friday and had just left the sundry shop at Cyber City near here.

The woman was about to get into her car at about 7.30pm when a man got into the back seat.

Apparently, he ordered her to move to the back seat while another person got into the driver’s seat and they drove off.

Kota Kinabalu acting OCPD Supt George Rakman said the woman was asked to keep her head low and to crouch in the back seat while they drove for about an hour.

“She was asked to surrender all her money and jewellery, ” he said.

About an hour later, the woman begged the two men to let her sit up as her back was hurting.

After being allowed to do so she took the opportunity to open the car door and jump out, said Supt George.

The woman escaped unhurt but lost about RM17,000 in the heist.

“She was rescued by passers-by, ” he said.

By then, she was in the Papar district, which was about 32km away from where the assailants targeted her.

This case is being investigated for gang robbery.

In another case, two suspected car thieves managed to evade capture even after policemen fired shots at them after the culprits tried to ram into them in Kg Dambai, Papar, yesterday morning.

Sources said prior to the shooting the policemen, with information of a car theft, asked the suspects to get out of the vehicle.

“However, instead of getting out of the parked car, the driver drove straight into our men in a bid to escape, ” said the source.

Policemen found the vehicle abandoned by the roadside several kilometres away. 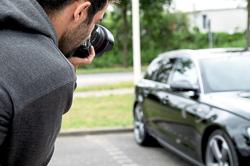