KLANG: Raging forest fires have destroyed a large chunk of the Kuala Langat Selatan forest reserve as more hotspots are detected, aggravated by the dry weather and wind conditions.

The authorities have expressed concern that the present hot spell could cause the fires to spread rapidly and turn the area into a furnace.

After the first round of fires were put out last week, they have since spotted at least 16 new hotspots, mostly due to open burning activities.

The forest fires are believed to be caused by farmers who habitually burn their land to prepare for the planting of new crops.

“Checks showed that the hotspots were due to burning on farming land, but no one was spotted at the locations, ” said Hee, adding that the department had carried out frequent supervisions of the area together with the Fire and Rescue Department.

Seven hotspots were detected in the forest reserve on Feb 22.

“Following this, an integrated fire extinguishing exercise was conducted, which ended on Feb 27.

“However, 16 new hotspots have since been detected there again, ” he said yesterday.

Hee said so far, 40.4ha of land had been razed due to open burning by illegal farmers in the area, as well as by legally owned farms located nearby.

“The hot and windy weather further contributed to the rapid spread of the fire, ” he added.

He said another integrated exercise to put out the fires was initiated on Monday and was expected to go on for four to six weeks until the fires were completely doused.

Ten excavators have been stationed at the location to carry out the exercise.

“This method of burning to fertilise the soil has been going on for 30 to 40 years among small-scale farmers.

“We were told that there is no other method.

“We cannot tell the farmers not to do it as planting crops is their source of income, ” he said.

Ahmad Fadzil said one possible solution was to request that the state government register all small-scale farmers under the Selangor Agricultural Development Corporation.

He said should a forest fire occur, there would be no need for them to go looking for the farmers.

“We hope the state government will accept this proposal as it will be a crucial tool to ‘control’ the activities of these registered farmers, ” he said.

When contacted, a farmer in the area claimed there was no other way to fertilise the land and get rid of old crops other than open burning.

“We will pile up the old plants and set them on fire before replanting.

“Then, we will mix the ash with chicken, goat or cattle manure and spread it on the vegetable beds before replanting, ” he said.

He said another reason why farmers set their old crops on fire was due to lack of manpower.

“Some are small-scale farmers and make just enough to fend for themselves and cannot afford to hire extra help, ” he added. 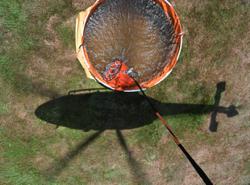