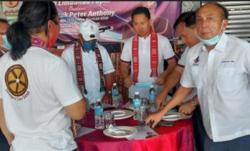 KOTA KINABALU: Melalap assemblymen Datuk Peter Anthony has forked out RM8,000 to help eight villagers, including the driver of a van, to pay their compound fines for breaching the movement control order.

A post on his Facebook page showed him accompanying the villagers to Tenom district police station on Tuesday (Feb 2), where they each paid the RM1,000 fine.

"I am doing this on humanitarian grounds. I understand the villagers' predicament as they live far from town.

"Many of them do not have television or access to Internet to know the latest SOP," Peter, who is Parti Warisan Sabah vice-president, said in his post.

The eight were detained by police on Jan 27 at a roadblock and issued summonses for breaching the MCO, including travelling in a "pirate" 13-seater van that was carrying more than the permitted 50% passenger capacity.

The villagers had highlighted the issue of the summonses during an interview with streaming channel KDM-TV. They claimed that they were on their way to pick up essentials and medicine from town.

Commenting on the issue, former Deputy Home Minister Datuk Azis Jamman said the government should be more sympathetic to rural people coming out of their villages to seek food and medicine during the current MCO.

He said people were already doing their best to comply with the MCO.

Azis, who is Warisan youth chief, said he was appalled by news that a group of poor villagers had to pay RM1,000 each while en route to Tenom to buy food and medicine.

Azis said although they had violated the MCO, the authorities should have been sensitive to their plight.

"It's bad enough that there is no food aid reaching some areas. Their movements are also restricted. They need food and medicine," he said after joining Warisan president Datuk Seri Shafie Apdal in distributing food aid to the villagers in Kampung Cenderamata in Likas here.

In urging the Gabungan Rakyat Sabah state government to expedite food aid distribution, Azis said there should be no discrimination because the Covid-19 virus is blind to race, religion and politics.

"When elected representatives from the Opposition visit their constituents, please don't stop the village community leaders and village chiefs from joining in because our sole purpose is to help the people who have been affected by the pandemic," he added.