The former prime minister said it would be unfair if public funds were utilised to contribute towards the RM150mil fund to purchase 150,000 laptops as part of the government initiative.

"It is unfair and unacceptable to take from the people's savings including Permodalan Nasional Bhd and Employees Provident Fund (EPF) if the project is announced as a government initiative," he said in a Facebook post on Tuesday (Jan 26).

During the tabling of Budget 2021 on Nov 6, it was announced that government-linked companies and government-linked investment companies would contribute RM150mil into Tabung Cerdik to provide laptops to 150,000 students in 500 schools as a pilot project, which will be supervised by Yayasan Hasanah.

Najib said the funds should be taken from Khazanah Nasional and Petronas as soon as possible to purchase the laptops as home-based teaching and learning (PdPR) virtual lessons would begin soon.

The Pekan MP also questioned why Khazanah Nasional did not help with the provision of laptops after it had disposed of assets worth “tens of billions of ringgit”.

He suggested that the government could provide subsidy coupons to purchase laptops, for instance, RM1,000 to B40 (bottom 40%) groups and RM500 coupons to M40 (middle 40%) groups.

"Malaysia has about 4.8 million primary and secondary school students.

"If we make a simple calculation, there is estimated around two million B40 students and another two million in the M40 group.

"If it is given in exact total, the amount will only be about RM3bil, which is less than 1% of Budget 2021.

The implementation of the PdPR nationwide is posing a challenge to parents, teachers and students.

Teachers have raised their concerns over the lack of devices, internet data plan and self-motivation.

Shahril said the key to addressing such challenges depended mainly on the government as it was impossible to rely mainly on non-governmental organisations or individuals such as popular preacher Ustaz Ebit Lew or Muar MP Syed Saddiq Syed Abdul Rahman.

"There should not be a strict and tight specification process to procure the devices.

"Let parents or students decide on what devices they want as long as it is suitable for PdPR.

"With the coupons or vouchers, it will stimulate spending in our economy. God-willing, there should be no problem," he said.

Shahril also said Yayasan Hasanah had informed that as a secretariat for the initiative, which is handled together with the Education Ministry, they had given certain specifications for the laptops.

"The matter should have been resolved earlier and the specifications determined last year, but that is fine, we must look forward," he said. 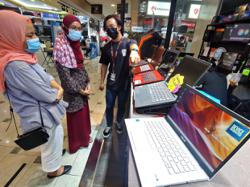