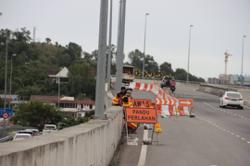 A section of the Lintas flyover in Kota Kinabalu has been closed to facilitate rectification after a a side barrier was dislocated.

KOTA KINABALU: The Sabah Public Works Department assures the public that the structurally-damaged Lintas flyover in Luyang is safe for motorists to use.

Sabah PWD director Ali Ahmad Hamid said that they closed one of the three lanes of the flyover where a side barrier was dislocated, which continues to cause concern since it was open to public use about two years ago.

"Generally, we have closed one of the three lanes at the top and one of the two lanes below," he said on Thursday (Jan 21).

Generally known as the Lintas flyover, public concern arose over a section of the structure near Taman Hilltop, especially after social media went abuzz with technical details of what was claimed to be "severe" structural issues came to light.

Ali said that they had been monitoring the structure and taking the necessary steps to rectify it.

"We have been monitoring for the last three weeks. We have held several technical meetings and discussions to find a solution. We are now doing some rectification works in stages," he explained.

However, Ali did not say how long the rectification would take.

Meanwhile, Ali said that the PWD would continue to take steps to rectify any road and bridge damage due to heavy rain over the past ten days across nine districts in Sabah.

Since heavy rains started, the PWD had 414 cases of road closures due to floods, road cave-ins and bridges damaged in the state.

As of Thursday, 255 affected areas have been resolved with 159 still affected.

"The majority of the roads (are still) not passable due to high flood levels caused by overflowing rivers and streams as well as the high tide phenomenon," he said.

On the landslides along main roads and damaged bridges following bad weather conditions over the last week, Deputy Chief Minister Datuk Seri Bung Moktar Radin said the state government would be seeking federal allocations for repairs of major roads, with priority given for highways.

He said the collapse of the parking area outside Kinabalu Park in Kundasang needed to be rectified as it was a key road that links Kota Kinabalu to Ranau and the east coast.

The unstable section along the road outside Kinabalu Park collapsed on Tuesday.

"The main road will be affected if we do not take immediate remedial measures," he added.