JOHOR BARU: In the good old pre-coronavirus days, Chin Jing Jing used to make up to eight types of kuih to sell at her stall in Kampung Pasir Putih, Pasir Gudang, here.Now that she has given up that business due to the movement control order, the 60-year-old isn’t actually taking things easy either.

She has been volunteering at a soup kitchen run by a temple near her house.

“I decided to close my shop at the end of March last year after business dropped badly during the first MCO. I have been selling kuih for decades after learning the skill from my mother at a young age, so I felt strange having so much time on my hands.

“I started spending more time helping out at the Chi Tian Si Buddhist Temple in Taman Scientex near my house in Masai.

“When a temple committee member asked me to make some kuih as treats for the other volunteers, I was more than happy to oblige as I got to share my snacks with others, ” she said in an interview.

When the temple’s founder decided to have a free lunch programme for the needy in September, Chin was appointed the head cook due to her decades of experience.

On a normal day, Chin, her two helpers and five other volunteers would start preparing food from 7am so that the meals would be ready by 10.30am for distribution.

Usually, she will come up with the week’s menu a week before, which she would then display in the kitchen.

“Our menu is different every day, comprising three to four types of dishes served with rice. Because we provide vegetarian meals made from fresh ingredients, the challenge is to come up with dishes that are not only nutritious and delicious but look appetising as well, ” said Chin.

Once the meals are distributed, Chin and the other volunteers get to work in the afternoon on the next day’s dishes, washing, chopping and preparing the ingredients until 5pm.

Recently, she started making kuih again after a friend asked for bite-sized snacks such as yam cake, ang ku kueh and glutinous rice for her coffee shop.

This gives her only a few hours to rest and catch up with her family after her work at the temple before getting busy with kuih-making from 9pm until 1am the next day.

Although her days are more hectic now, Chin has no regrets at all.

“I enjoy cooking for others, especially when I know that the meals we cook at the temple will go to the less privileged, such as poor families, old folk and children at charity homes as well as residents at a drug rehabilitation centre.

“Although I love making kuih for sale, I feel a deeper sense of responsibility and satisfaction cooking for charity, especially when so many people’s incomes have been affected again by the current MCO.

“I hope to be able to volunteer for as long as I can, ” she said.

The free lunch packs are available at Chi Tian Si Buddhist Temple in Jalan Persiaran Scientex 2, Taman Scientex, Pasir Gudang from 10.30am daily, except on Mondays. 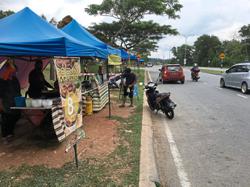