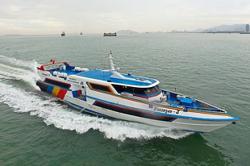 GEORGE TOWN: With travelling time reduced by more than half, most commuters are readily paying RM1.20 for a return trip to cross the channel.

Ticket rates for the new fast boat ferry service remain the same as when the iconic ferries were in use.

Cleaner T. Sugumari, 60, said it took only about 10 minutes to cross the Penang Strait, about half the time compared to using the old ferries.

“I can arrive at work earlier and it makes planning easier, ” said Sugumari, who works at Penang Sentral.

She said the ticket price was even cheaper than the RM2 bus fare for the Paya Terubong-Weld Quay route.

The two-week free ride for foot passengers crossing the Penang Strait ended yesterday, with commuters now having to pay RM1.20 (adults) and 60 sen (children) for the fast boats.

They only have to pay once at the Pengkalan Sultan Abdul Halim in Butterworth while the return trip from the island is free.

Lottery ticket seller P. Pusmanathan, 53, who takes the ferry almost daily, said he was glad that the ticket price for fast boats remained the same.

“The ticket price has been the same since 2000. For today’s cost of living, the price is cheap as we only pay once for a return trip, ” he said.

Pusmanathan hopes that once the terminals are upgraded, the access to getting into ferries will improve with shorter walks and waiting time at the terminals.

Since Jan 1, Penang’s ferry service has entered a new era with two fast boats for foot passengers while one of the old ferries is for two-wheelers only.

This is the interim phase until June 30 next year, with the ferry terminals being upgraded and hi-tech water buses and vehicular ferries under construction. 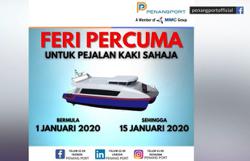