A man charged for harrasing a police officer in obstructing police on duties. - Ronnie Chin/The Star

IPOH: A grasscutter was charged at a Magistrate's Court here with obstructing and causing injuries to a policeman on duty.

P. Subramaniam, 49, pleaded not guilty and claimed trial when the charges were read before Magistrate Noor Azreen Liana Mohd Darus.

According to the charge sheet, Subramaniam allegedly obstructed Sjn Mohd Zainudin Mohd Jidin from performing his duty when the latter requested for Subramaniam's MyKad at Flat Harmoni in Buntong around 3.15pm on Tuesday (Jan 12).

For his offences, Subramaniam is being charged under Section 186 with obstructing civil servants from performing their duties and Section 322 of the Penal Code for causing hurt.

The punishment under Section 186 carries two years jail, or a maximum of RM10,000 fine or both, while Section 324 carries a jail term up to 10 years with fine or whipping or any two of the punishment, if convicted.

During the mitigation, lawyer Ranjit Singh, who represented Subramaniam, said his client would lodge a police report against the police officer.

"The officer was not in his uniform when he asked Subramaniam to provide his MyKad.

"My client only earns RM1,200 a month and is raising four children. His wife is not working," he said, adding that this is Subramaniam's first offense.

Noor Azreen Liana set the bail for RM4,000 for both charges with one surety and fixed Feb 18 for the mention. 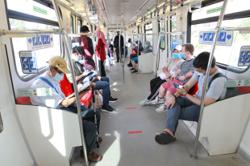