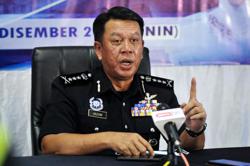 He said police would make the suggestion to the state security council as many people lived beyond 10km from the closest township.

Comm Hazani was speaking after visiting a roadblock along the Penampang - Old Papar road near here on Wednesday (Jan 13).

"I am asking for a little bit of leeway on this (10km) condition as Sabah is a large state and some people need to travel more than 10km to buy their essential goods.

"For example, for those in Sabdindo (which is under the Papar district), it is very far for them to go to Papar town but it will be closer for them to cross into the Putatan district to buy their essential goods.

"Similarly, people in Tongod (in central Sabah) need to go to the Telupid district to get their essential household items. The limited 10km movement allowed cannot be used because of distances," he said.

However, Comm Hazani said that people going out shopping for essentials must bring along proof such as electricity or water bills to indicate the area of their home address.

During the MCO, he said a total of 53 roadblocks are in place in addition to those already set-up for the enhanced MCO at Timbang Dayang in Kota Belud and 10 under Op Benteng involving borders at Kalimantan and in the east coast.

He said that police will not compromise in their actions from Saturday (Jan 16) as they were still giving people a chance to return to their hometowns until then.

"After Friday (Jan 15), we will not compromise on inter-district travel and only the Inspector-General of Police can approve such travel for those wanting to go back," he said.

Comm Hazani said there must be discipline among the people to observe the SOPs and he supported the need for higher fines as well as arresting repeat offenders.