Balik Pulau OCPD Supt A. Anbalagan said in the 1.30pm incident on Wednesday (Jan 6), the suspects had tailed the victim, who was riding a motorcycle, to a market area in Sungai Ara.

"The duo, on a motorcycle, approached the victim from behind and tried to snatch her sling bag.

"This caused the victim to fall from her motorcycle and the suspects fled," he said in a statement on Friday (Jan 8).

He said the suspects failed to rob the victim as she managed to hold on to her bag.

However, the victim suffered minor injuries to her hand and legs.

After conducting an investigation, police detained two suspects aged 18 and 20 in the Bayan Lepas area.

He said police believe the suspects were involved in several cases in the southwest and northeast districts.

Police are still tracking another suspect who remains at large.

He said the suspects are unemployed and have prior criminal records, including for drugs.

The suspects have been remanded for three days until Sunday (Jan 10) and the case is being investigated under Section 394 of the Penal Code. 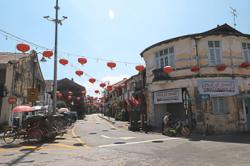