The Chief Minister noted that the state still hoped the project would resume in the future with at least one station made available for Melakans.

“For the time being, we will continue with the proposed development plans.

“I believe there will be similar plan activated (by the Federal Government) to have high speed rail connectivity here, ” he said yesterday.

Sulaiman said hopefully the project could be revived to connect Kuala Lumpur to Johor Baru.

“Melaka will benefit immensely with a station made available here, ” he added.

Sulaiman acknowledged the move to discontinue the project had impacted development plans outlined by the state government.

He said the HSR was crucial for the state, especially to complement the proposed Melaka Waterfront Economic Zone (M-WEZ) project.Minister in the Prime Minister’s Department (Economic Affairs) Datuk Seri Mustapa Mohamed was reported as saying that the pandemic had forced the government to re-evaluate the HSR project.

Last July, the state government identified a new site for an HSR station which was previously planned for Ayer Keroh.

The new site proposed was near the Melaka Green City, between Durian Tunggal in Alor Gajah and Ayer Panas in Jasin.

The HSR project in Melaka involves a 60km track. 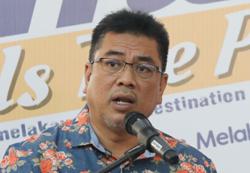