Perak MB on party-hopping reps: Seats won by Umno should be returned to us

TAIPING: Seats won by Umno in Perak during the 14th General Election must be rightfully returned to the party in the event of any cooperation between other Malay political parties, says Datuk Saarani Mohamad (pic).

The Perak Mentri Besar said several representatives entrusted by Umno to contest in the seats during the last general election had betrayed the party by jumping ship to another political party.

“So these seats where the representatives had betrayed us, must be returned to Umno.

“The Larut parliamentary seat, and the Sungai Manik and Tualang Sekah state seats are some examples where the seats were won by Umno, but the representatives later jumped to Parti Pribumi Bersatu Malaysia, ” he said in his speech at the opening of the Larut Umno division meeting at a hotel here.

All three contested under Umno, but later jumped to Bersatu.

Saarani added that there would be no compromise on the matter of the distribution of seats.

“These seats must be returned to Umno because the party still has many more loyal members as replacement to those who betrayed us.

“Although the distribution of the seats has yet to be finalised, Umno must have a strong stance on its rights and position first.

“Umno must be very careful in recognising who is the party’s friend, and who is the opponent, ” he added. 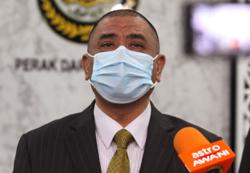