Mustapa: Terms of HSR agreement were no longer viable due to economic situation

PETALING JAYA: The terms of the 2016 bilateral agreement between Malaysia and Singapore on the High Speed Rail (HSR) project that was supposed to link Kuala Lumpur and Singapore were no longer viable due to the economic situation, which led to its eventual termination, says Datuk Seri Mustapa Mohamed.

He said that since late 2018, the government had explored a number of alternatives to reduce the cost of the HSR project, which became more urgent with the onset of the Covid-19 pandemic.

He said that since the middle of last year, they had proposed changes to the project that included the project structure, alignment and station design.

"The original project structure would have required substantial and long-term government guarantees.

"The new project structure was expected to provide the government flexibility in financing options such as deferred payments, public-private partnerships and the possibility of accessing financing at favourable rates," he said in a statement on Friday (Jan 1).

Earlier, both countries announced the termination of the project saying they could not come to an agreement with changes proposed by Malaysia.

He added that the proposed changes to the project structure would have allowed the country to leverage on the HSR project to accelerate Malaysia's economic recovery post the Covid-19 pandemic, by bringing forward the start of the construction phase by almost two years.

"This would have provided a much-needed boost to our construction sector and its supporting ecosystem," he said, adding that both governments had conducted a number of discussions on their respective positions.

Mustapa said they were not able to come to an agreement on these changes, and the bilateral agreement therefore lapsed on Dec 31.

He said by virtue of the agreement and previously-agreed terms, Malaysia would honour its obligations and that both countries would initiate the necessary to determine the amount of compensation.

"Moving forward, the government will undertake a detailed study to explore all possible options, including the viability of a domestic HSR project and its benefits to Malaysians.

"Malaysia and Singapore enjoy very close bilateral ties. We will continue to strengthen these ties, including further enhancing connectivity between our two countries for mutual benefit," said Mustapa.

The HSR was targeted to be up and running by 2026 and was expected to cut travel time between Kuala Lumpur and Singapore to just 90 minutes.

The HSR line was to stretch 350km, with 335km in Malaysia and 15km in Singapore. 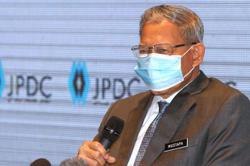