GEORGE TOWN: Transport Minister Dr Wee Ka Siong has taken Lim Guan Eng to task for trying to characterise the upgrading of Penang's ferry service on New Year's Day as a "cancellation" of the service.

Wee said although the Federal Government was only striving to take the ferry service to the next level, the DAP secretary general tried to label it as "the cancellation of the iconic 126-year-old Penang ferry service".

He added that the ferry service was not being cancelled.

The Transport Minister said on his Facebook page on Sunday (Dec 27) that the previous Pakatan Harapan government also wanted to replace Penang's ferries, suggesting with catamarans as replacement.

He cited a portion of the speech by Senator Lim Hui Ying, Lim's sister, on Dec 17, stating that replacing the decades-old ferries was "a modernisation that could not be avoided".

Hui Ying, in the Dewan Negara, called for the upgrade to be expedited and felt that a one-year time frame would be too long.

Wee expressed consternation that Lim's press statement on Sunday (Dec 27) was not in line with his sister's remarks in the Dewan Negara.

"Isn’t replacing the ferries that are prone to breakdowns with catamarans a more practical move to protect the safety of Penangites and more beneficial to Penang’s travel and transport industries?" he asked.

In the short-term, two high-capacity passenger boats will be deployed beginning on New Year's Day to ferry pedestrians across the channel at almost twice the speed of what the decades-old ferries could manage.

In the meantime, the existing ferry terminals on the island and in Butterworth will be upgraded so that water buses and vehicle transporters can dock at the terminals.

This upgrade is expected to take 12 to 18 months.

After that, the last of the old Penang ferries will be converted into floating museums, restaurants and other tourist attractions.

Dr Wee said "the Penang Chief Minister recognised by Federal Government is none other than Chow Kon Yeow".

He added that Finance Minister Tengku Zafrul Aziz and he would discuss any further decisions on Penang's ferry service with Chow. 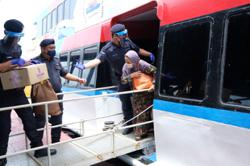