Perak PAS will wait for instruction from central committee on formation of state govt, says Razman

IPOH: Perak PAS will wait for its central committee’s instruction and decision on the formation of the state government, says Razman Zakaria (pic).

The state PAS commissioner said for now they will defend the Perikatan Nasional government that was formed earlier.

“We will wait for instructions and decisions of the top leadership for the formation of the state government.

“Currently, Perak does not have a government and is awaiting the order from the Perak Sultan on who has the majority to be appointed as the new Mentri Besar, he said.

Razman was speaking to reporters after Datuk Seri Ahmad Faizal Azumu announced his resignation as the MB at Laman Seri Ridzuan here on Saturday (Dec 5).

When asked if a new coalition would be formed in Perak, Razman declined to comment further on the matter.

He said, what is certain is that PAS would remain with the principle that they would not be with Bersatu alone without Umno, and neither would the party be with Umno only without Bersatu. 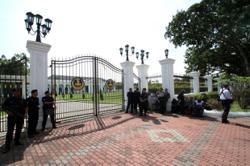