DON’T BE AFRAID TO START AT THE BOTTOM Nabilah and Mohd Rizuan, who was given the honour to strike the gong, together with long-service colleagues at MR.DIY Group’s listing on Bursa Malaysia.

A GREAT place to work usually translates to compassionate and extraordinary employers.

This applies to homegrown brand MR.DIY, which aspires to be the largest home improvement retailer in Malaysia.

The company is willing to go the extra mile by extending its culture of caring, commitment and generosity to groom locals to be successful in their careers, and contribute to the well-being of the communities.

This is noted from the heartwarming stories of two workers who are part of MR.DIY’s over 10,000 employees in Malaysia.

Income as a hawker was unstable to support his parents and siblings so he joined MR.DIY in October 2008 as a “store boy” at the invitation of its management team who were his regular customers. 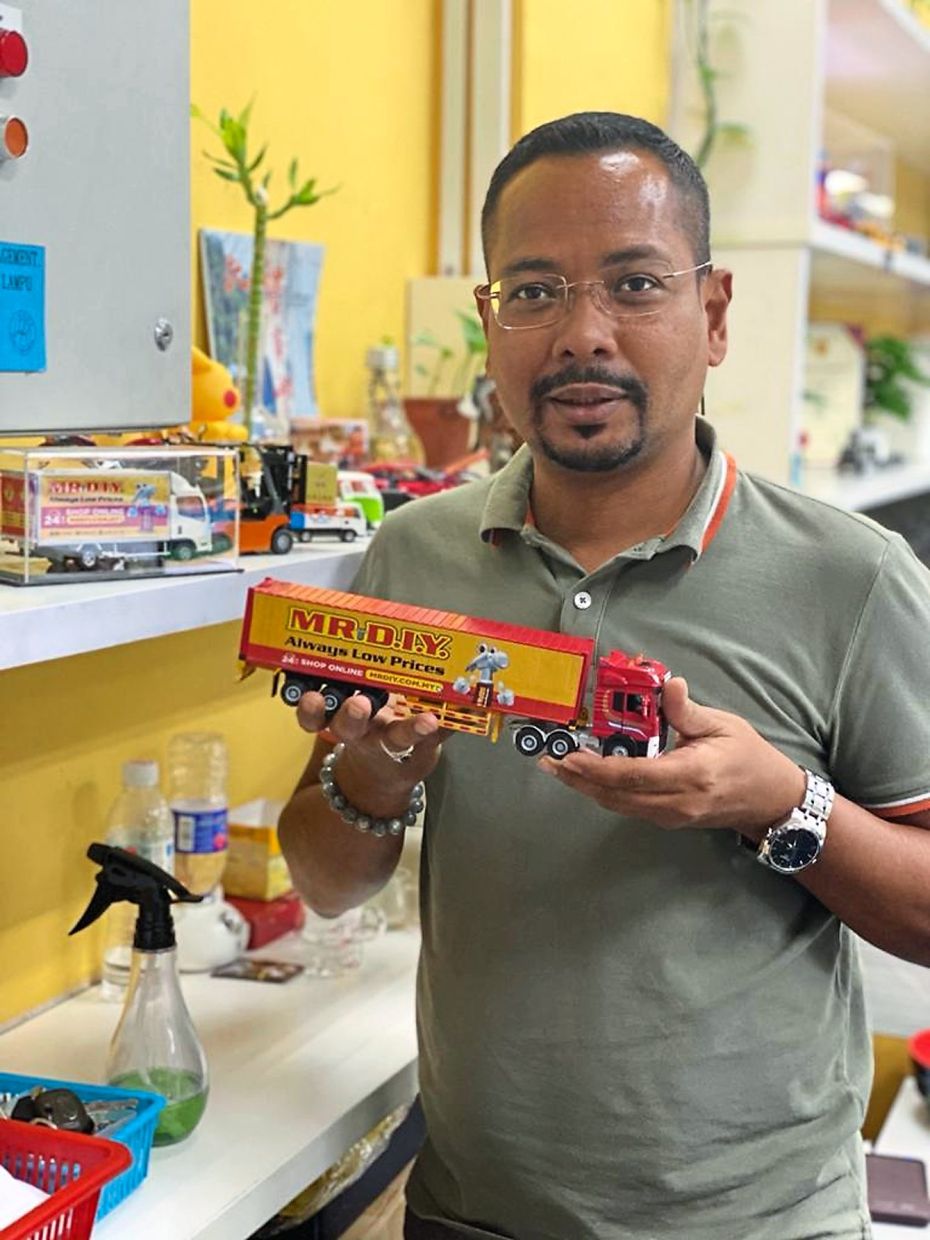 Mohd Rizuan started out as a ‘store boy’ in 2008. He is now senior manager of MR.DIY’s transport and warehouse department.

Within a year, the bachelor from Penang was made store assistant, followed by assistant manager in 2012 to oversee the transport division of the company.

After four years, he became senior assistant manager, and in 2016 was elevated to manager of the transport division.

In 2017, MR.DIY promoted him to senior manager of its transport and warehouse department.

“The promotion was a great leap for me after working hard all these years for the company, ” said Abang Wan, who has now clocked 12 years with MR.DIY.

“I still remember the day I joined MR.DIY in 2008. The management team came down wearing T-shirts to help with deliveries at the warehouse, as we were short-handed.

“It was an experience I will never forget. I have never seen such humility from those who hold high positions in a company, who are not afraid to go to the ground and work hand in hand with the workers, ” he shared.

Another memorable moment was when Abang Wan was asked to strike the gong to commemorate MR.DIY Group’s listing on Bursa Malaysia in October.

“It was a great honour for me as usually the owner or CEO will be the one striking the gong. It was very touching, and yet a beautiful moment, which I shall also never forget.”

He was thankful to be selected by the management to hit the gong, and stood together with his long-service colleagues at the event.

“It was a historical day for the company, and we were proud to be part of it, ” he said.

Abang Wan actually thought about quitting when he first joined MR.DIY, because “I did not have much experience in warehousing, ” he said.

“After receiving training and guidance, and with the support and motivation from my employers, and also due to their humble attitude, I decided to stay on.”

And there was no looking back.

“MR.DIY is a great local enterprise, ” he continued. “Today, the company which started in 2005 as a hardware store in Jalan Tuanku Abdul Rahman in KL has expanded to a chain with over 660 stores across the country.

“And I want to see the company continue to build its name in the retail industry and expand to the global stage, ” he enthused.

In the midst of the pandemic, MR.DIY announced in July that it planned to open 100 new stores and with the expansion, the company was hiring 1,000 people.

“For those who are looking for jobs, come and join the MR.DIY family, ” said Abang Wan.

“We provide skills and knowledge to build your career. Don’t be afraid of starting from the bottom. You will learn more to reach the next level.”

Working for MR.DIY has given Abang Wan the chance to travel to Europe in February this year before the international borders were closed.

“I spent three weeks there visiting seven countries, ” he said, adding that he has been able to go for holidays with his family every year.

Choice between civil service and MR.DIY

Nabilah Abdul Ghani, 28, a division manager in Perak, has worked for MR.DIY for eight years.

She started out as a promoter at MR.DIY’s store in Ipoh Parade in 2012 while she was studying for a secretarial diploma. Nabilah (front) with her colleagues at a MR.DIY store. She was a part-time promoter as a student, and since joining fulltime in 2012, she is now division manager in charge of 18 stores and more than 200 employees.

“My area managers gave me a week off to sit for my exams. After completing my studies, I continued working at MR.DIY, ” she said.

After two months of fulltime employment, she was made assistant supervisor of the store, and a few months later, became a supervisor.

Nabilah was then offered a job as a secretary with the Perak state government. She deliberated over the offer and finally decided to remain with MR.DIY.

In 2017, she was appointed senior branch manager, and a year later was elevated to her current position of division manager in charge of 18 stores and more than 200 employees.

Nabilah concurred with Abang Wan that MR.DIY is a great local enterprise, as it improved her working habits and made her more systematic at her job, besides providing her training and motivational sessions.

She finds that managing people is her biggest job challenge as each person has individual attitudes.

“As a leader, it’s my duty to ensure that they understand the importance of their work and to follow the standard operating procedures stipulated by the company.”

Her message to young people is: “MR.DIY provides many benefits if you work hard. Don’t be afraid to start from the lowest level because by beginning at the bottom, you learn more.

“Here we have a healthy work environment with humble employers who make the employees feel comfortable and passionate in their work.”

She said that besides medical and insurance, the benefits include annual company trips for employees.

“My life has changed. I have been able to buy a house, a car, insurance for myself and also provide some help to my family members, ” she added.

MR.DIY provides a comfortable and wholesome family shopping experience at all its stores nationwide and online (www.mrdiy.com.my).

With five major categories – hardware; household and furnishing; electrical; stationery; and sports equipment – and other products such as toys, car accessories, jewellery, cosmetics and, food and beverage items, MR.DIY offers a wide selection of more than 16,600 types of products at “Always Low Prices”.