KEMAMAN (Bernama): Not long after they had secured their belongings from being inundated and destroyed by flood waters, residents of Kg Teladas near Air Putih here are now back home to clear the mess the floods had created.

A check by Bernama at the village Sunday (Nov 29) found that residents who were evacuated to flood relief centres (PPS) took the opportunity to visit their homes as early as 7am to begin the cleaning process due to the good weather conditions.

Villager Kamaruddin Sulong, 61, said it never crossed his mind that the impact of this year’s flood incident would be quite bad as the last time his house was inundated was in 2014.

"The water had never risen this high before, because usually, only the nearby bridge would be flooded. Fortunately, I had built a small attic to keep our clothes and important documents... if not, everything would be soaked in mud like before.

"However, the cooking utensils such as pots, pans and dishes need to be cleaned properly because they were muddy as the water rose up to my neck level in the kitchen. The living area and bedrooms which were built quite high were also flooded up to calf level, ” said Kamaruddin, who cleaned the house together with his wife Zurni Ngah, 57, as their only child is working in Johor.

Currently there are 729 flood victims from 175 families at five PPS in Kemaman district.

Another villager, Nurhamiza Mahasan, 31, had to seek her close relatives’ help to clean up her house as she was still recovering from minor surgery following a miscarriage on Nov 2.

"When the water rose on Friday (Nov 27) morning, I was at home with my husband and four-year-old son.

"Due to the tense situation, I forgot that I was in confinement. All I thought was about moving the fridge and other things to a higher area. When we arrived at the PPS, then only I felt the pain. Fortunately, there were nurses who provided me with first aid and some medication, ” she said.

For Anita Sulong, 50, she has no idea how long it would take to clean up the house as it was badly covered with thick mud which would require the assistance of her two nieces.

"During the 2014 flood, it took quite some time to clean the house to its original condition. Maybe I will wait until the monsoon season ends in February before I rearrange the furniture and everything, ” she said.

Meanwhile, Kg Teladas Village Community Management Council chairman Yazid Yasin said 20 houses were inundated up to the rooftop level while over 130 were flooded up to the waist or neck level, depending on the location.

He said there were volunteers from Rela, Unit Amal PAS and the Civil Defence Force to assist residents who have difficulties in cleaning their houses. - Bernama 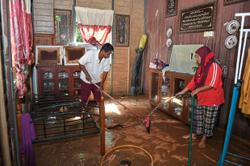