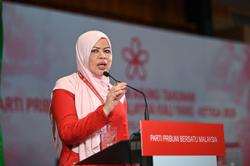 "If I were asked what is the core problem that continues to shackle the Malay struggle today, it cannot run from the three connected diseases of timidity of spirit, poverty in morals and colonised minds," he said in his opening speech at Bersatu's third annual general assembly which was held virtually on Saturday (Nov 28).

He added that the Malay struggle is not a new agenda but a continuous cause which Bersatu has now taken on, saying that the party's youth wing bears the responsibility of demolishing this "Malay dilemma".

However, Wan Ahmad noted that in championing the Malays, Bersatu will not deny the diversity and collaboration of "Bangsa Malaysia".

"In line with the Constitution, Bersatu is committed to uniting the community under one national umbrella which is the Seri Paduka Baginda Yang di-Pertuan Agong," he added.

In the coming general election, Wan Ahmad said that Bersatu must tap into the youth as half of the nation's population is currently below 30 years old.

"Once Undi18 comes into force next July, youths will be the largest voting group which must be engaged," he added.

In this respect, he said the youth wing is proposing that 20% of candidates for the coming elections must come from the youths.

Wan Ahmad added that this includes the selection of candidates for the Senate, Dewan Rakyat and local councils, including the administration

On the recent passing of Budget 2021 at the policy stage in Parliament, Wan Ahmad expressed confidence that the present government would be able to return with a two-thirds majority if the momentum is maintained.

"We will be successful in the general election and return with a two third-majority, something which has not been achieved in almost two decades," he said.