ACTRESS Puteri Aishah had to be admitted into a private healthcare facility after she accidentally sliced off a chunk of her finger, Berita Harian reported.

Her manager Iman Tang said a chunk of her left pinky had been sliced off by a knife when she was cutting fruit.

“It could be that the fruit was too hard or the knife’s edge was sharp, but she cut her finger until a chunk of it was sliced, and there was a lot of bleeding.

“Puteri was taken to a private hospital in Ampang to get treatment. According to the doctor’s report, the injury to the finger was pretty serious and it needed immediate surgery, ” he said.

“No sleep for Dr Halina, it’s breastfeeding every two hours, ” he said in an Instagram post on Saturday.

He joked that he was already planning for their next baby, though he needs “to convince Dr Halina first”. 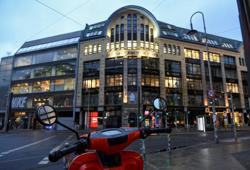