Shahelmey (centre) looks on as one of the volunteers puts the finishing touches to a personal protective equipment (PPE) gown at a handing-over ceremony on Tuesday (Nov 24).

KOTA KINABALU: Recipients under the e-Kasih programme, a government database of registered poor families, are also eligible to receive food baskets under a government programme in Sabah, says Shahelmey Yahya.

The Sabah State Community Development and People’s Well-being Minister said this when asked of plans to expand the food basket programme to other groups during the ongoing movement restrictions in Sabah.

“Previously, we had two categories - communities under enhanced MCO and families under quarantine in the conditional MCO.

“Now, we have included those on the e-Kasih list and this has been going on for about a week.

“Of the more than 216,000 food baskets distributed statewide on Monday (Nov 23), about 33,000 were given to e-Kasih recipients,” he said, adding that he could not provide the total number of e-Kasih recipients as it was not under his ministry’s purview.

Shahelmey was speaking during the hand-over of personal protective equipment (PPE) to the Sabah Health Department from Sabah Kawasan Rukun Tetangga (KRT) volunteers who prepared and sewed the gowns.

He said any future plans to spread the food basket programme further would depend on the pandemic situation and the advice given by the National Security Council and state disaster management committee.

Shahelmey also said those who had lost their livelihoods due to the Covid-19 pandemic could reach out to their respective elected representatives as a Bantuan Prihatin Covid-19 fund had been announced recently during the state assembly sitting.

“This is part of the RM160mil allocation Chief Minister Datuk Seri Hajiji Noor announced when tabling the additional expenditure bill.

“If these affected people fall under the B40 group including fishermen and taxi, lorry or minibus drivers, the various state ministries have been given their respective Bantuan Prihatin Covid-19 allocations, where they can channel a one-off RM300 to the recipients' bank accounts,” he explained.

Shahelmey said for his ministry alone, an estimated 70,000 people would be given the aid, including the disabled, senior citizens and single mothers, as well as low-income families with children.

“On Tuesday (Nov 24) morning, my permanent secretary told me that more than RM18mil of the targeted RM21mil allocated to the ministry had been transferred into the accounts of recipients,” he added.

Earlier, Shahelmey explained that while Covid-19 contributions from non-governmental organisations (NGOs) and the private sector were welcomed, there are risks when it comes to distributing the aid thus donors must follow the proper channels so that the standard operating procedures (SOPs) would be adhered to.

Meanwhile, Shahelmey said that under a National Unity Ministry programme, 19 KRTs across Sabah have volunteered to produce PPE since September this year.

“Today, we are handing over 3,674 PPE gowns, 232 face shields and 232 pairs of foot covers to the State Health Department.

State National Unity and Integration Department director Delin Liet Blaun, who was also present, said the KRT volunteers were not given allowances but their expenses, such as food and beverages, were covered by the ministry’s grant. 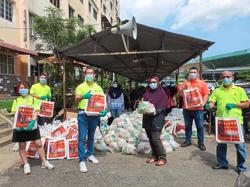 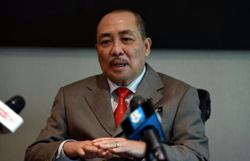