SERDANG: The police busted an illegal online gambling den which operated under the guise of a snooker centre in Seri Kembangan on Saturday (Nov 21).

Serdang OCPD Asst Comm Razali Abu Samah said the syndicate used an office labelled "For Staff Only" at the snooker centre in an effort to avoid detection.

"However, we managed to uncover their deception and raided the gambling den at about 9pm on Saturday. We detained eight people at the gambling den, including three women. seized 14 laptops and RM443 in cash," he said.

A caretaker for the premises was also detained during the raid, he added when speaking to reporters at the scene on Saturday night.

"The syndicate installed CCTV all over the location and monitored the situation using a tablet. Only regular customers were allowed to enter the gambling den," he said.

ACP Razali added that the syndicate is believed to have been operating since Sept 18.

"When questioned, the common excuse for the customers would be that it was their first time playing there. The workers at the premises would also have similar excuses," he said.

ACP Razali added that the Serdang police will continuously bust illegal gambling dens in the district.

"We hope those with information will contact the nearest police station.

"The cooperation of the public is vital in this war against illegal gambling," he added. 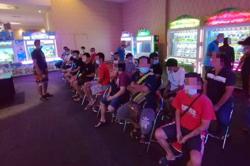 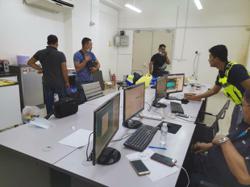