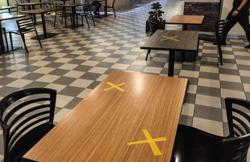 Seven in Sibu restaurant fined RM1k each for violating MCO

SIBU: A cafe owner was among eight people fined RM1,000 each for violating the recovery MCO on Friday (Nov 20) night.

Six customers, four men and two women, at another cafe at Jalan Sena were also penalised for sitting together at a table.

"A worker of the cafe was also compounded for not wearing a face mask," he added.

The eight were fined by an integrated recovery MCO enforcement team which comprised 31 police personnel including three senior police officers aided by 10 members from Rela, Armed Forces and the Sibu Municipal Council.

The operation around the town from 6.30pm to midnight was led by Sibu Crime Prevention and Community Policing Department chief Deputy Supt Ariffin Bahar.

During the operation, a total of 16 summonses were also issued to motorists for various traffic offences.

"Two youths, aged 15, were fined for doing dangerous stunts on Jalan Permai. Their motorcycles were seized," he added.

ACP Stanley said the other 14 summonses were issued to motorists for not having a driving license (four), not wearing a helmet (four), no side mirror (two), expired road tax (one) and modified exhaust pipe (one).

Seven in Sibu restaurant fined RM1k each for violating MCO 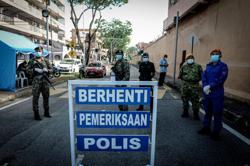