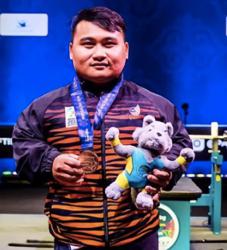 “Baharom is known to be very friendly and well-liked by other journalists, ” said Sultan Abdullah in a statement on the Istana Negara Facebook page.

His Majesty hopes Baharom’s family would be patient and resolute in facing this test and moment of grief.

Star Media Group adviser Datuk Seri Wong Chun Wai said he had lost a good friend whom he regarded as a man of integrity with a high standard of professionalism in his work.

“More importantly, he was a true Malaysian with strong moderate views. It’s shocking to me as we had just met at The Star’s office on Oct 31.“I will miss him, ” said Wong.

Veteran journalist and former The Star senior editor Hoo Ban Kee remembered Baharom as a friendly and caring person with a ready smile.

He said despite their age gap, they became close friends when they were in London in the 1990s as correspondents.

“We met almost daily in our work and other activities. Together with other Malaysian journalists, we always celebrated major festivals like Chinese New Year and Hari Raya.

“We lived like a big Malaysian family. On top of it all, I realised that he was a very caring person.

“He would call me almost every day to enquire how I was as I was staying alone at one time, ” said Hoo.

“Following that, he had a bacterial infection and yesterday, the complications attacked his heart, ” he said.

Hussamuddin described Baharom as a hardworking person who was dedicated, firm and meticulous in his work, and had successfully transformed Sinar Harian, one of the publications under the Karangkraf Group.

“He had proven himself and constantly moved up the ladder. I have known him since his days in Utusan Malaysia and our friendship goes back almost 30 years.

“I am saddened to hear the news of his passing. I just met him on Oct 31, when we and several other veterans joined Syed Saddiq Syed Abdul Rahman on a programme of The Star’s.

“Baharom did not look well then but still raised many questions on youths and their struggle, ” said Azman.

Baharom, who was born in Kuantan, was appointed group editor-in-chief of Sinar Harian in April 2019.

Baharom had started his career as a reporter before moving on to become the London correspondent of Utusan Malaysia between 1994 and 1997.