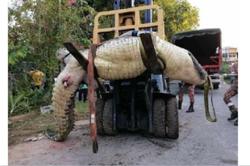 Put to sleep: The carcass of the euthanised giant crocodile being transported by forklift to a nature sanctuary for burial. (Photo courtesy of the Sarawak Forestry Corporation)

MIRI: A monster-sized crocodile weighing about 500kg, which was captured alive near a school in Limbang town, has been put to sleep.

Euthanasia had to be performed as the crocodile was suffering from a gunshot wound to its head, said chief executive officer of Sarawak Forestry Corporation (SFC) Zolkipli Mohamad Aton.

The SFC carried out the procedure.

“The wound was too severe to be nursed. We had to put it to sleep. A member of the public had shot the crocodile in the head before the Limbang Fire and Rescue Department could reach it. SFC is investigating who shot it,” he said.

Zolkipli said the carcass was transported to a nature sanctuary located in Kubong village in the outskirts of the town for burial.

The crocodile, measuring about five metres long, was caught on Tuesday by firemen after it wandered into a drain near SK St Edmund.

They later handed the reptile to the SFC.

It is not immediately known where the crocodile had come from and why it had wandered into the town, which is located along the banks of the Limbang River. 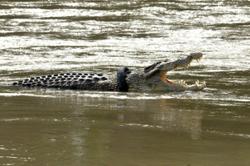 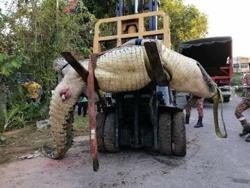