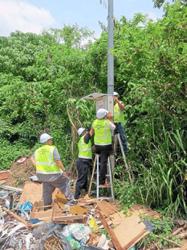 IPOH: A group of activists here has submitted a petition to the Ipoh City Council in a bid to stop the ongoing development at Ipoh Padang.

Christy Pathrose Gomez from the Save Ipoh Padang group said they are worried of any development at the field that may destroy the structure of one of Ipoh’s iconic landmarks.

“We are aware of the ad hoc hearing session and the public apology by the state local government committee chairman, Datuk Nolee Ashilin Radzi.

“But we need more than that, we need the development to be stopped right away, ” he told reporters at the Ipoh City Council building here Thursday (Nov 12).

On Sept 26, Nolee Ashilin assured conservation groups that the heritage of Ipoh Padang would not be affected by the ongoing construction on its field before apologising over the lack of public engagement regarding the project.

The project has raised concerns among the public, heritage groups and even environmentalists.

Construction for a “light and sound” show at the field was reported in June last year.

Gomez said the Save Ipoh Padang group had garnered over 4,000 signatures from members of the public to stop the project.

“As an academic researcher, I would like to see the Social Impact Assessment Report regarding this project.

“Can the council guarantee that the field’s structure will not be affected by this project?

“We did not want Ipoh Padang to be yet another ‘carnival park’ for the sake of tourism. People’s benefit should also be considered in this project.

“Once the project is complete and open to the public, vendors and traders will come in to set their business and this could slowly affect the structure of this field.

“In addition, the fountain requires a high maintenance fee, ” he added.

The Star has reached out to Ipoh Mayor Datuk Rumaizi Baharin, and will provide updates on this issue.