Deferred: Bill to amend S'wak constitution on eligibility to be state rep

KUCHING: A Bill to amend the Sarawak state constitution which was tabled in the state legislative assembly on Tuesday (Nov 10) has been deferred due to "anomalies" in its wording.

Speaker Datuk Amar Mohamad Asfia Awang Nassar made the ruling after the debate on the Bill, which drew strong objections from the opposition.

"In view of these anomalies and clarifications to be made, I hereby defer this Bill to a date to be fixed," he said.

The Bill, which was tabled by Tourism, Arts and Culture Minister Datuk Abdul Karim Rahman Hamzah, proposed to amend Article 16 of the state constitution to lower the age of persons eligible to be elected to the Sarawak legislative assembly from 21 to 18 years, and also to define the phrase "resident in the state" in accordance with Section 71 of the Immigration Act.

According to Karim, the first part of the amendment was necessary so that the state constitution would be consistent with the Federal Constitution, in line with the amendment passed in Parliament last year to lower the age qualification of persons eligible to be elected to the legislature.

As for the second part of the amendment, he said it would clarify the qualification of "resident in the state", which was currently not defined in the state constitution.

However, opposition members from DAP and Parti Sarawak Bersatu (PSB) objected to the proposed amendment to define "resident in the state" according to Section 71 of the Immigration Act, which provides that citizens shall be treated as belonging to an East Malaysian state if they have been permanent residents in the state for two years.

Chong Chieng Jen (DAP-Kota Sentosa) said this would mean allowing non-Sarawakian Malaysians with permanent residency status in Sarawak to be elected to the state legislature.

"We should not allow this to happen. It would amount to a sell-out of the rights and privileges of Sarawakians," he said when debating the Bill.

Datuk Seri Wong Soon Koh (PSB-Bawang Assan) said Section 71 of the Immigration Act was enacted for the purposes of Section 66, which covers the right of entry into Sarawak.

"It has absolutely nothing to do with the right to be elected as a member of the Sarawak Legislative Assembly.

"It is totally improper to equate the right of entry into Sarawak with the right of election to the state legislative assembly," he said.

Wong later told reporters that as far as he was aware, this was the first time a Bill had been deferred following its tabling in the state legislature.

"A deferment means they can bring it back another time. If this Bill is passed, the floodgates will be open to all those who come in and stay for two years to be eligible for election to the state legislative assembly," he said. 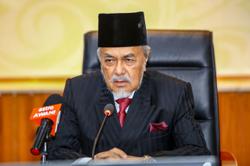