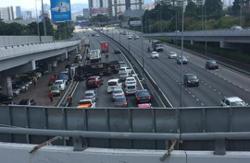 KUALA LUMPUR: Two men, who hid a package of ketum water inside a food delivery bag, were detained on the Gombak-bound lane of the Middle Ring Road 2 (MRR2).

Sentul OCPD Asst Comm S. Shanmugamoorthy said the two men, aged 18 and 23, were riding a motorcycle when police told them to stop at about 9.30pm on Monday (Nov 2).

"We ordered them to stop their vehicle but they made a U-turn, heading towards Jinjang," he said when contacted on Tuesday (Nov 3).

Police gave chase and caught up with the suspects, who had hit a car nearby, he added.

"We detained the two men and discovered four packets of ketum water inside the food delivery bag," he said.

One of the suspects admitted to borrowing the delivery bag from another friend in a bid to avoid detection during a roadblock, ACP Shanmugamoorthy said.