This follows after a videographer was told to undergo quarantine by the Health Ministry.

Several journalists and photographers including state executive councillors and the videographer were at the press conference at Chow's office in Komtar on Wednesday (Oct 28).

It is believed the videographer was told to take a swab test after his roommate from a factory was found to be Covid-19 positive.

Chow had cancelled all his events on Friday (Oct 30).

Kelab Mutiara Pulau Pinang, which represents the journalists and photographers, said the videographer did the swab test in a local clinic today and awaiting results.

The association urged the journalists and photographers who were present at the event yesterday to practise self-quarantine.

It urged everyone involved not to post the issue on Facebook to refrain from inviting adverse comments. 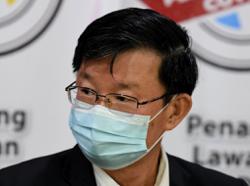