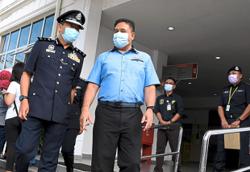 SEREMBAN: The King’s decree that there is no need to proclaim an Emergency in the country at this point has been lauded by many political leaders.

Umno deputy president Datuk Seri Mohamad Hasan (pic) said the decision was also in line with provisions in the Federal Constitution while recognising the hard work and sacrifices of frontliners who had been doing their best to stem the spread of Covid-19.

“The King and the Malay Rulers have made the best decision for Malaysia and in the best interest of the people.

“It should now encourage all parties to come forward and work with the government to fight this global pandemic, ” he said in a statement yesterday.

Mohamad said the wisdom shown by the King was a testament to the very important constitutional role played by the monarch in the country’s administration.

“For the umpteenth time, the King and the Malay Rulers have given priority to the people and their well-being, ” he said.

He expressed confidence that the Perikatan Nasional government would do whatever was necessary to execute the decision.

“Firstly, he advised politicians to stop politicking, and secondly, Malaysians should be united in facing Covid-19.

“For us in Sarawak, we will abide by the Yang di-Pertuan Agong’s advice and we will continue to carry out our duties to serve the people, ” he told reporters after launching the deployment of artificial reef balls in the Sampadi-Tanjung Datu coastal waters.

He added that he would leave it to the Election Commission (EC) and health authorities to come up with a standard operating procedure for the election to be held in a controlled environment so that it would not lead to a spike in Covid-19 cases.

“I hope the EC can learn from Singapore and New Zealand’s experience of conducting elections during the pandemic, ” he added.

Parti Warisan Sabah president Datuk Seri Mohd Shafie Apdal has called on all political leaders to work together as the nation battles Covid-19, following the Yang di-Pertuan Agong’s decision not to declare an Emergency in the country.

Hailing the decision as something to be thankful for, he urged all Warisan MPs to adhere to the decree.

He also hopes all political leaders will work together to make sure that the nation will be able to fight the Covid-19 pandemic.

The former Sabah chief minister reiterated the party’s stand that there was nothing more important than economic and political stability.

“We can only revive our economy if all leaders put politics, religion and race aside and work as one to find solutions to rebuild this nation, ” Shafie said in a statement yesterday.

He noted that apart from the communities, businesses were also badly affected by the pandemic.

“If you have any good and helpful ideas to share on how to solve the problems faced, please do so, ” he said.

Shafie also urged all leaders to assist their constituents in this fight against the virus and economic slowdown.