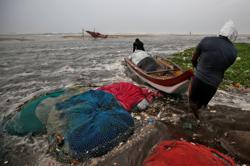 Hundreds evacuated in Indian city of Chennai as cyclone nears

The roof was damaged during a rainstorm in February, affecting the school’s 200 pupils.

School headmaster T. Selvaraju said former state exco member and Sungkai assemblyman A. Sivanesan allocated RM18,000 for repairs.However, the work was delayed due to the change in the Perak government.

The school management and the parent-teacher association are grateful to the state government and Sivanesan for their help, Selvaraju said.

> A group of Indian youths in Rawang, Selangor, took the initiative to repair a damaged drain cover which had caused a few accidents in Rawang Mutiara, Malaysia Nanban reported.

A number of motorcyclists have had their bike tyres caught in the damaged metal grating, causing the riders to crash.

Branch chairman Mahendran said the community and residents were thankful to the youth members for solving the problem.

Hundreds evacuated in Indian city of Chennai as cyclone nears