The Defence Ministry said the government decided to end the MFH operation this year, compared to the original operational mandate, which ends in December 2021.

The Ministry said that the total number of patients monthly had shown a downward trend, in which only 1,690 people sought treatment at the hospital in February 2020, compared to 8,763 patients in November 2018, the highest since the MFH’s establishment in November 2017.

“The downward trend in the number of cases and patient attendance were due to the stabilised situation in the refugee camp area, and the improved health conditions of the Rohingya refugees since chronic diseases had been treated and many surgical procedures were successfully performed,” the ministry said in a statement on Wednesday (Oct 21).

It added that there are six additional field hospitals established by Turkey and other international NGOs such as Mèdecins Sans Frontiéres (MSF), HOPE Foundation, MSF Spain, Bangladesh Red Crescent Society, and Friendship which are located within the refugee camp.

“The increase in the number of field hospitals had given more options and access to healthcare services to Rohingya refugees and locals who have since reduced their dependency on the MFH which was located outside the refugee camp,” said the Ministry.

Among the services provided were general surgery, orthopedics, obstetrics and gynecology, anesthesia, x-rays, and other key treatments such as family health, emergency, dental and radiology, as well as laboratory.

It was manned by 56 personnel on a rotational basis, consisting of 20 Malaysian Armed Forces (MAF) officers including eight physicians, 30 members of other ranks of the Royal Medical Corps, and six civilian nurses.

Altogether, the MAF had sent five medical teams to the MFH, which was established to provide humanitarian aid to Rohingya refugees who have fled to Bangladesh following the conflict in Rakhine, Myanmar.

“The establishment of the MFH had succeeded in achieving its objectives, and this withdrawal neither affects bilateral relations between Malaysia and Bangladesh nor the country's image,” said the Ministry.

It added that as a responsible member of the international community, Malaysia is deeply concerned about the Rohingya humanitarian crisis and will continue to play a role in highlighting issues at regional and international levels, particularly in finding long-term solutions to these issues. 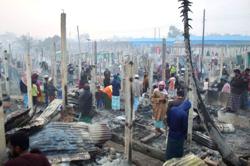