“The drones cost the state government RM2mil and they will be used by the Selangor Water Management Authority.

“The drones will be used for round-the-clock monitoring at the sites and they are equipped with night vision too.

“The attention is on the river basins at Sungai Selangor and Sungai Langat because these are the locations where pollution most frequently happens.

“This drone is of military standard and has features that enables night surveillance too, ” said Hee at a press conference held at Sungai Gong, Rawang yesterday.

He also announced that stiffer penalties under the Selangor Water Management Authority Enactment 1999 would be tabled for approval at the upcoming Selangor State Assembly sitting.

“The current maximum fine for water polluters is RM100,000 or imprisonment of not more than three years.

“We are going to increase the fine to a minimum of RM200,000 and maximum of RM1mil as well as a jail term of not more than three years, ” he elaborated.

Whistleblowers who report any act of pollution will also be rewarded with RM20,000

“We will protect the identity of the whistleblowers, ” Hee assured.

Meanwhile, he said there were no illegal factories along Sungai Selangor, and the Selayang Municipal Council had been working hard in monitoring the river round the clock too.

“We are still investigating the current source of this odour pollution, which is suspected to be from a solvent.

“The state government does not rule out acts of sabotage.

“We have lodged a police report and will wait for the outcome of the investigation, ” he said when asked about the source of pollution.

Hee said the odour pollution was recorded at about one TON (threshold odour number).

Klang Valley folks woke up to the news of a water cut yesterday morning as a million accounts in the Klang Valley faced a water supply disruption due to suspected contamination of Sungai Selangor. 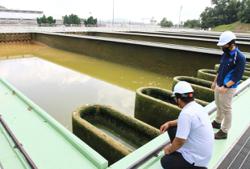