MELAKA (Bernama): For failing to self-quarantine as ordered by the Health Ministry, a former contractor was sentenced to 14 days’ jail and fined RM1,000 by the magistrate’s court here.

Despite being ordered to self-quarantine, the man went out to work and shop after returning from Sabah to vote in the recent state election.

Magistrate Muhammad Nazrin Ali Rahim passed the sentence on Md Syafrizan Salleh, 32, after he pleaded guilty to the offence and he is to start the jail term from Monday (Oct 19).

The court also ordered the father of two who hails from Papar, Sabah to be jailed for another seven days if he failed to pay the fine.

"You should have acted responsibly and understood that the self-quarantine was necessary after you returned to the peninsula from a high-risk area, to ensure that you were really healthy and not infect others because if you were (Covid-19) positive, it would have an impact on the lives and safety of others, ” Muhammad Nazrin told the accused.

Md Syafrizan was alleged to have violated the order issued by the Health Ministry on Sept 29 to quarantine himself at Bangunan Pentadbiran Persiaran Penapisan Sungai Udang here.

He was charged under Section 24 of the Prevention and Control of Infectious Diseases Act 1988, which provides for a jail term of up to two years or a fine or both.

Prosecuting officer ASP Nora Yaacob appeared for the prosecution while the accused was represented by a trainee lawyer.

Outside the court, ASP Nora said Md Syafrizan returned to Kota Kinabalu on Sept 26 to vote in the state election and when he returned to the peninsula, he was to self-quarantine for 14 days from Sept 28 to Oct 11 under the Home Surveillance Order (HSO), and to wear the pink wristband.

She said based on the investigation conducted, the accused had gone out of the quarantine centre to work and buy some daily necessities. - Bernama 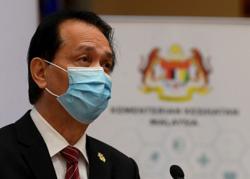 Anwar may have wanted to avoid King's anger in directing Pakatan MPs to back Budget 2021 at policy stage, says Kadir Jasin
Court sets aside fine, jail sentence against former DBKL executive director for power abuse
Bullets in the mail: Cops nab three, looking for one more over threat to Customs officer
PM: Covid-19 vaccines for 6.4 million Malaysians as early as January next year
Man arrested for allegedly raping eight-year-old after enticing her with candy
Colleagues of Gemilang cluster index patient in JB screened for Covid-19
Gerakan lodges MACC report over Penang’s funding for comics museum
Three lose a total of RM40k after being duped by separate loan scams
Man admits to threatening to kill his mother
Man charged with causing friend's death, hurting ex-wife