In a statement, Senior Minister (Security) Datuk Seri Ismail Sabri Yaakob said of the 82 nabbed on Monday (Sept 28), six were held under remand, while 75 others were issued compounds.

One was released on bail.

Ismail Sabri said among the recovery MCO offences that were committed included failure to adhere to physical distancing (46 individuals), failure to wear face masks (23), failure to provide check-in facilities for customers (12) and getting involved in pub/nightclub activities (one).

The arrests were made during checks by police on Monday (Sept 29), who is leading the government’s task force on standard operating procedures (SOPs) compliance.

Ismail Sabri, who is Defence Minister, said police, together with the Malaysian Border Security Malaysia and the Armed Forces had put up 81 roadblocks nationwide on Monday under “Ops Benteng”.

Ops Benteng was set up to control the country’s borders from illegal entry, which at the same time also prevents the transmission of Covid-19 from abroad.

Ismail Sabri also said between July 24 and Sept 29, a total of 37,133 individuals have entered the country through international entry points.

So far, 8,671 individuals are currently under mandatory quarantine while 28,356 others have already been discharged.

Another 106 individuals have been sent to hospitals for treatment.

He said since March 30, the ministry had conducted 10,153 sanitisation operations in 135 zones.

“Based on the checks, it is found that 933 premises have adhered to the government’s SOPs. Another 15 businesses were given advice for not following SOPs, ” he said. 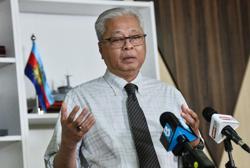