PUTRAJAYA: Malaysia’s active cases of Covid-19 have breached the 1,000 figure while total number has crossed the 11,000 mark after 115 new infections were recorded in the span of 24 hours.

In a statement, Health Ministry director-general Tan Sri Dr Noor Hisham Abdullah said the total number of active cases in the country had now gone up to 1,011 cases.

“The total number of cases in the country is 11,034. The active cases with Covid-19 infectivity is 1,011 cases. They have been isolated and are being given treatment,” he said.

Sabah has again recorded the highest number of new Covid-19 cases with 98 out of 115 infections are from the state.

The Bangau-Bangau cluster in Semporna saw an additional 46 positive cases, which takes its total to 225.

The Benteng LD (Lahad Datu) cluster, currently the country’s biggest and most active cluster, has 39 new cases, bringing its tally to 873.

The other clusters in Sabah which also saw new cases are the Pulau cluster (two cases) and the Buang Sayang cluster (one).

At least 11 of yesterday’s new cases are individuals with travel history to Sabah.

Ten of those cases were found in Selangor while one was detected in Terengganu.

Six of the Selangor cases are linked to a new cluster, dubbed by the ministry as the ‘Jalan Apas cluster’.

Dr Noor Hisham said the two index cases were a husband, 26, and wife, 24, who had travelled to Tawau and Semporna from Sept 13-16.

“Both index cases had symptoms of fever, cough and flu on Sept 18 and they sought treatment on Sept 19. They were then referred to Hospital Tengku Ampuan Rahimah in Klang on Sept 24.

“They tested positive for Covid-19 on Sept 26 and were admitted to Hospital Sungai Buloh,” said Dr Noor Hisham.

Screening of 66 individuals who are close contacts of the husband and wife found six more new cases, aged between 13 and 60.

“Another 56 individuals have tested negative while two others are still waiting for their test results,” he said.

No new fatalities were reported, which means the country’s death toll remains at 134.

Meanwhile, earlier in the day at a Malaysia Breast Care Nurse meeting, Dr Noor Hisham told reporters that stricter restrictions on movement was not imposed in Sabah to allow voters to cast the ballots during state polls on Saturday.

He, however, noted that the authorities had taken strict measures to check the spread of Covid-19 in the state.

These included enhancing border control to prevent foreigners from entering the country illegally, he said.

“We took several measures similar to during the MCO, such as tighter border control as well as roadblocks by enforcement agencies.

“However, we did not announce the enforcement of MCO or targeted enhanced MCO because we did not want to create this impression that we are preventing voters from exercising their right to vote,” he said when asked on the matter.

Sabah had just concluded its election and the state saw a spike in the number of Covid-19 cases in recent weeks, including during campaigning period.

The Health Ministry had earlier announced that individuals returning from Sabah between Sept 27 and Oct 10 are subjected to compulsory Covid-19 inspection upon arrival at entry points in the peninsula and Sarawak. 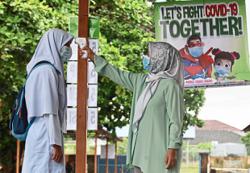 Most Selangor infections not linked to Sabah