PETALING JAYA: A suspected burglar was caught red-handed after an alert homeowner saw a motorcycle parked in front of his house and called the police.

"The homeowner, a businessman, found out about the break-in when he got home and saw an unknown motorcycle outside his house," he said in a statement.

He said the man called his wife to check if there was anyone at the house but she said no one was there.

"He found it suspicious and called the police. A team from the Petaling Jaya police station task force and an MPV unit arrived 10 minutes later," he said, adding that they arrested a 42-year-old man who was attempting to flee the scene.

He said police also seized a laptop, two keys for Mercedes and BMW cars, a wallet, sunglasses, gloves, a screwdriver, scissors and a silver stick.

"Further checks revealed the suspect had a record for house break-ins, robbery and drug-related crime.

"We have remanded him for four days," he said, urging anyone with information on similar cases to contact the police hotline at 03-2052 9999. 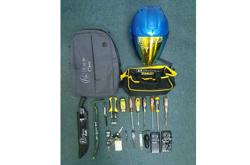 Not a Han Solo moment: Biker riding ‘suspiciously’ turned out to be suspected burglar