The businessman-cum-social activist is up against a formidable opponent as Leiking is known as the “Giant Killer”.

Leiking earned the title after knocking out political stalwart Tan Sri Bernard Dompok for the Penampang parliamentary seat in 2013.

Suleiman, who is known for his work with the community, including protesting the controversial Papar dam, believes he can pull off an upset.

“I will do my best for Moyog if I am given a chance. Our problems of flood, traffic congestion and proper roads to kampung have never been resolved.

“I am sure I can do better than the Penampang MP, ” he told reporters yesterday.

The 59-year-old claims that he is gaining ground as Leiking has not really been around to listen to people’s problems.

“People don’t see him around as he was mostly in Kuala Lumpur. People need an assemblyman they can reach, ” he said.

“It’s proven that I’m on the ground helping people, especially on community service and welfare. My record shows, ” he said.

“I believe among the seven candidates, I’ve a slight lead.”

Suleiman, who is contesting under the Perikatan Nasional symbol, is in direct clash with Parti Bersatu Sabah’s John Masabal. PBS is a Perikatan-friendly party under Gabungan Rakyat Sabah.

Also in the running for a constituency where family ties and personality count, is Parti Cinta Sabah’s Datuk William Sampil.

The other contenders are from the Liberal Democratic Party, Parti Perpaduan Rakyat Sabah and an Independent.

Leiking, who is replacing Warisan’s incumbent Jenifer Lasimbang for the state seat, remains a front runner in the race. 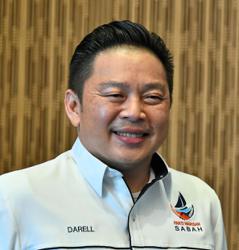