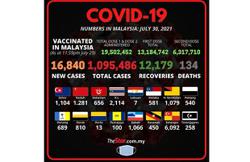 PETALING JAYA: The authorities have identified 28 dengue hotspots nationwide, as Selangor takes the lead with the highest number of cases.

The highest number of hotspots are in Selangor (19), followed by the Federal Territories (six), Negri Sembilan (two) and Johor (one).

The bulk of the hotspots in Selangor are in Hulu Langat (11 locations), followed by Petaling (8 locations).

Hotspots in the Federal Territories were in Titiwangsa, Kepong and Cheras areas.

According to the Health Ministry, Week 37 saw 0.8% increase in the number of dengue cases (1,491) compared to the previous week.

The Health Ministry had warned of a second wave of dengue cases from June to September, based on the trend recorded over the last five years.

"Take 10 minutes to search and destroy Aedes breeding grounds inside and outside homes," the Health Ministry advised the public.

The Ministry also noted that 165 new dengue cases were recorded on Saturday, and the bulk of the cases were in Selangor (61), and Johor (39).