MELAKA: An archaeology buff believes Pulau Melaka has manyitems of historical value after discovering remains of a wooden vessel and artefacts thought to date back to the Song and Ming dynasties as well as the Melaka Sultanate.

Datuk Dr Dionysius S.K. Sharma claimed that more artefacts could be unearthed if proper excavation is carried out in Pulau Melaka.

He now works with the National Heritage Department and Melaka Museum Corporation (Perzim) to look for artefacts related to the Melaka Sultanate.

“We can find more of these artefacts that have emerged due to marine reclamation works.

“I believe there are many shipwrecks at the site which have yet to be unearthed,” he said in an interview yesterday.

The remnants of the vessel was unveiled to the media by National Heritage Department’s director-general and commissioner Mesran Mohd Yusop.

Dr Sharma, who is from the state, said among the items found at the site were artefacts dating back to Sultan Mahmud Shah (1488 to 1511) as well as from Chinese, Portuguese and Dutch eras.

The items discovered, among others, were ancient coins, pieces of porcelain and ceramic ware.

Earlier, Mesran said the remnants of the ancient vessel is believed to date back to the Yuan Dynasty.

The Yuan dynasty was established by Emperor Kublai Khan, leader of the Mongol Borjigin clan. The dynasty operated from 1271 to 1368.

Mesran said the discovery is crucial to Melaka’s history.

“The findings will give us a more in-depth look into the Melaka Sultanate as well as maritime trade that were carried out along our coastline.”

Mesran said that the archaeology research at the site must be done systematically to preserve the local history. 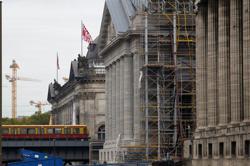