PETALING JAYA: Melaka beaches are eroding, and the authorities should investigate the root cause of the problem, says the Consumers Association of Penang (CAP).

He said CAP had carried out a survey to verify complaints of erosion in those areas.

"We urge the Melaka government to investigate and take immediate action to overcome the coastal erosion problem in the state, as it is becoming more critical," he said in a statement.

Dozens of trees had fallen and fishing sheds had collapsed due to coastal erosion.

The authorities should take immediate action before the erosion takes a toll on roads and houses in the vicinity, he added.

"The erosion has caused anxiety among the fisherfolk," he said.

Fishing nets were also damaged by drifting twigs, wood and other wastes.

"The erosion has not only threatened the environment in the area but also affected the daily activities of the fisher communities," he said.

He said about 200 fishermen in the area had to use pulley to moor boats, as the coastal area had become more steep following the collapse of beaches.

CAP said the situation could become more critical if immediate actions were not taken, as properties in the coastal area could be damaged due to widespread erosion.

CAP called upon the state authorities and relevant agencies to investigate the root causes of the coastal erosion.

"The main focus should be on land reclamation activities and the merchant ship passage that may have contributed to the coastal erosion problems in the state.

"In addition, the problem of sedimentation and narrowing of fishing areas affecting fisherfolk livelihood should be addressed immediately," he said.

Discounts for fines are not a good idea 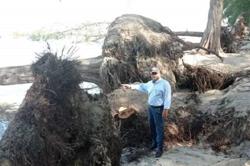