PETALING JAYA: The Port Klang Free Zone (PKFZ) is on track to surpass its RM100mil profit target by the end of the year despite challenges brought on by the Covid-19 pandemic, says Transport Minister Datuk Seri Dr Wee Ka Siong.

"Congratulations to the management and the entire PKFZ family, who remain on the right track as it looks set to achieve profits above RM100mil as forecasted by the end of 2020," he said in a Facebook post on Tuesday (Sept 8) night.

Dr Wee, who had earlier attended PKFZ's 15th anniversary celebrations, noted that it had succeeded in attracting over RM7bil in domestic and foreign investment since beginning operations in 2005.

He added that PKFZ had posted double-digit growth over the last five years, adding that such growth is estimated to increase yearly.

"At present, Port Klang is the 12th largest port in the world. This is an achievement that should be commended," he said, noting that PKFZ was first mooted in 1997.

Acknowledging that the Covid-19 pandemic had impacted PKFZ, Dr Wee expressed hope that the port would be able to weather the challenges and avoid getting trapped in a financial crisis.

"As a caring government, especially in such trying times due to the Covid-19 pandemic, PKFZ has been provided with financial incentives such as a deferral of rent payments of up to 30% for a six-month period beginning in July 2020," he added.

He said the Port Klang Authority (PKA) had also introduced several measures such as the development of commercial integrated duty-free, quality infrastructure and a focus in increasing exports while expanding warehouse logistics and capacity.

Dr Wee said that the Transport Ministry would continue to support the effort to develop the nation's ports, adding that this includes improving infrastructure while increasing productivity through the use of technology. 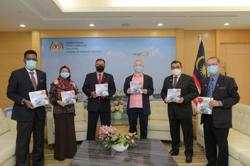