Many in a daze over housing for construction workers

He said the confusion also involved the required thickness of a mattress to be provided to a worker.

He said many were not sure whether a four-inch mattress must be provided as part of the lodging for foreign workers.

Tee said providing specific types of accommodation to workers was a costly affair for many contractors especially during the current economic climate, already impacted by the Covid-19 pandemic.

He pointed out that contractors usually housed their workers at the project site as it was more convenient.

“This is normal when workers will move to another site once a project has been completed. If we provide them with house or building further from the project site, the cost will be expensive as transport will have to be provided for the workers, ” he said.

He urged employers still in the dark about the regulations to get in touch with his department.

“Our main focus now is to create awareness about the regulations before carrying out any enforcement, ” he said.

Johor Bumiputra Solid Waste Contractors Association secretary Abdullah Awang said many of its members were complying with the new ruling.

“We have been renting houses or shoplots for our foreign workers. Normally, the premises that we rent is not far from the worksite.

“We have also been adhering to the SOP such as conducting frequent temperature checks for our workers, ” he said, adding that there were 300 companies under the association.

In George Town, most construction firms and developers said they had been providing proper accommodation for their workers for some time already.

“Most of the workers are usually brought to the site during their shifts and are not allowed to stay on at the site after working hours, ” he said.

Tan said the association had not received any official letter from the authorities about the enforcement of the new law.

“We have not received any clear instruction from either the state or federal governments, ” he said.

Tan said the federal policy would eventually be implemented and all developers would have to comply.

He said certain costs of materials, especially those related to construction, would most likely increase due to the new policy.

Penang Deputy Chief Minister II Dr P. Ramasamy said that the state had yet to receive any instruction from the Human Resources Ministry about enforcement of the new law.

“It is a good law if it says that employers must provide living quarters for their workers. I have no problem with that.

“My concern is the implementation of the law, whether they are going to enforce it or not. I am not sure, ” said Ramasamy. 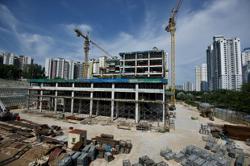